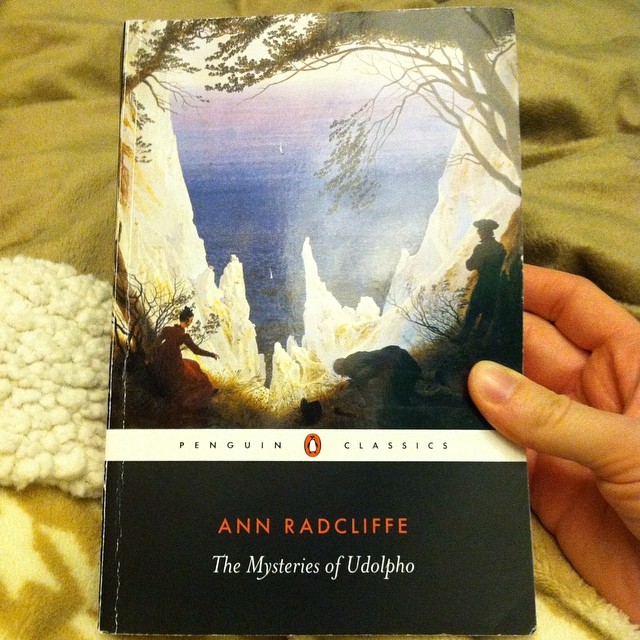 As part of my journey to read more gothic fiction, Ann Radcliffe’s The Mysteries of Udolpho was my first read of 2016. If you have any interest in the Gothic Horror genre, I highly recommend reading this book (although I think this is technically more of a Gothic Romance?). Read on for my thoughts on this classic novel–but be warned: there are spoilers aplenty!

First off, let me just say–If you have any interest in reading this novel, please avoid this blog post for now. I think this book is best read without any knowledge of the plot. In fact, I was even kind of bummed by how much info the back of my Penguin Classics edition gave away before I read the novel. I’ll be the first to admit that this book is a little all over the place. It’s part travelogue, part romance, part ghost story (without a single ghost, mind you), and includes a heavy dose of poetry, too. But overall, I was actually very invested in the plot, and eager to know what was going to happen next. For me, this was actually quite the page turner.

The story begins in 1584 and follows the life of Emily St. Aubert, a young woman who lives a simple life in the wilderness of France with her loving parents… until both of her parents fall ill and pass away, and Emily is sent into the care of her shallow-minded aunt, Madame Cheron. What was once a life of simple pleasures (walks through the woods, evenings spent playing the lute in the company of her parents, etc) has turned to a decadent lifestyle where Emily is forced to attend dinner parties and mingle with Madame Cheron’s guests. At least Emily is encouraged to marry the love of her life, a valiant young man named Valencourt–

Until Madame Cheron marries the evil Signor Montoni and Emily is separated from her lover. Eventually, Montoni drags Emily and her aunt to his secluded gothic castle Udolpho. It’s a drafty place with hidden passageways, strange apparitions (who end up just being actual people anyway), and spooky sounds (again, just actual people saying words). Turns out, Montoni is a really, really evil dude and Emily’s aunt eventually dies after spending several days imprisoned without care. After some twists and turns, Emily is eventually able to escape with the help of several servants. She later finds herself much under the care of the fatherly Count de Villefort in his home (which, also, by the way, seems to be haunted–but, alas, the “ghosts” were just regular ole people all along). It is from him that Emily soon hears of Valencourt’s tragic fall from grace (he lost all his money gambling in Paris), and has to question her love for him.

After a few revelations about Emily’s family tree, she inherits a sum of property, and learns that Valencourt’s sinful Paris lifestyle wasn’t nearly as bad as the rumors she’d heard… and they live happily on.

Overall, this novel seemed to showcase that the “splendour of art” is vastly inferior to “the sublimity of nature,” (181) that “the romantic error of amiable minds” (78) can cause insensible fear, and that Emily’s commitment to upholding her fortitude is what ultimately brings her happiness in the end. I have to say, Emily’s emotions quite often get the best of her and she faints A LOT, which is actually pretty annoying. And did I mention that there isn’t a single ghost in this novel?