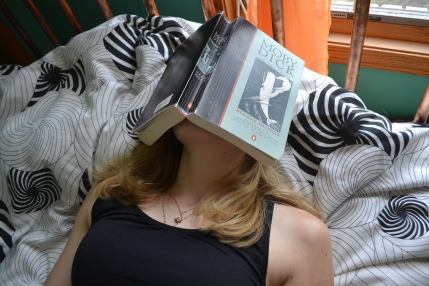 When I picked up Moby-Dick a month ago with the intent of finally reading it, I wasn’t intimidated by its complexity. I was intimidated by its length. Coming in at over 600 pages, there’s no doubt it’s a big book. I was nervous that I wouldn’t be able to devote the amount of time this novel required and deserved. But by taking my time and reading consistently, I was able to finish in exactly a month.

To state what is probably obvious, Moby-Dick is like nothing I’ve ever read before.

The novel seems to be two things at once: 1. an adventure novel & 2. an excruciatingly detailed depiction of whaling in the 1800s. It’s disorienting to follow a book that in some chapters describes the peculiarities of manic Captain Ahab, or the highly-dangerous capture of a whale, or the highly-satisfying relationship between our narrator and his cannibal friend Queequeg and then immediately later be subjected to encyclopedia-like chapters on different types of whales and the comparable worth of their oil, or the proper way to butcher a whale carcass, or the various inaccuracies of leviathan illustrations in history.

After reflecting a little bit on my own experience reading this book, here are a few tips I’ve compiled for anyone reluctant (or, perhaps eager?) to dive in to Herman Melville’s most famous literary accomplishment.

Don’t be intimidated. Seriously. Moby-Dick isn’t hard to read. I found that as long as I took my time and kept my awareness focused on the book while I was reading (which you should ideally do any time you read anything), that I had no problem following the story. In my opinion (for what it’s worth), if you can get past the first few chapters–enough to get acclimated to the language and old-fashioned dialogue–then you probably won’t encounter too terribly much trouble later on.

For whatever reason, I thought the language would be clunky, elaborate, and convoluted, but that is absolutely not the case! Yes, several of Ishmael’s metaphysical reflections on life are complex and beautifully-written. I found myself highlighting several wondrous passages. It’s a very quotable book. But the story itself–the actual narrative–is easy to follow if you take your time.

Read consistently. Moby-Dick invites itself to being consumed in short bursts. The book has 135 chapters (!!!), several of which are very short, making them great to read when you have a few minutes of downtime here and there. Just be aware that some chapters are action-packed and seem to fly by, while others seem to read more like a medical journal. Keep up your pace if you can. Read a little bit everyday and you may be surprised by how quickly you get through it.

Remember your narrator. The very first line of chapter 1 (“Call me Ishmael.”) establishes our narrator and storyteller for the entirety of the book. Yet, somehow, a few hundred pages in, I was under the impression that it was Melville himself taking me through the story. I was irritated at all the strange sidebars about whaling that distracted me from the story. I felt that it was strangely and (dare I say it?) almost poorly written. The facts about whaling and whale ships could’ve been incorporated much more seamlessly into the novel. But then I remembered–Melville isn’t telling the story. Ishmael is. And Ishmael isn’t trained professionally as a writer. He’s a sailor with a passion for whaling and an extraordinary story to tell. Forget that he’s your narrator, and you’ll end up cheating yourself of an appreciation for the format of this book.

A few small (albeit, highly satisfying) things have happened since I finished Moby-Dick. The most obvious is that I’m now able to summarize the plot, something I was never able to do before (I literally didn’t know what happened in the book until I read it). The more rewarding element is that I’ve since recognized several Moby-Dick references that I never would have otherwise. This book is everywhere!

I’ll never be a Moby-Dick expert. I’m not going to write a thematic essay on the novel or have sophisticated conversations about 19th century whaling practices. But I now have a legitimate excuse to use “chasing the white whale” as a metaphor in everyday speech, and quite frankly, that’s enough to make me happy.

Have you read Moby-Dick? Have tips for anyone who wants to dive in?

2 thoughts on “My Impressions of Moby-Dick (+Tips for Reading!)”